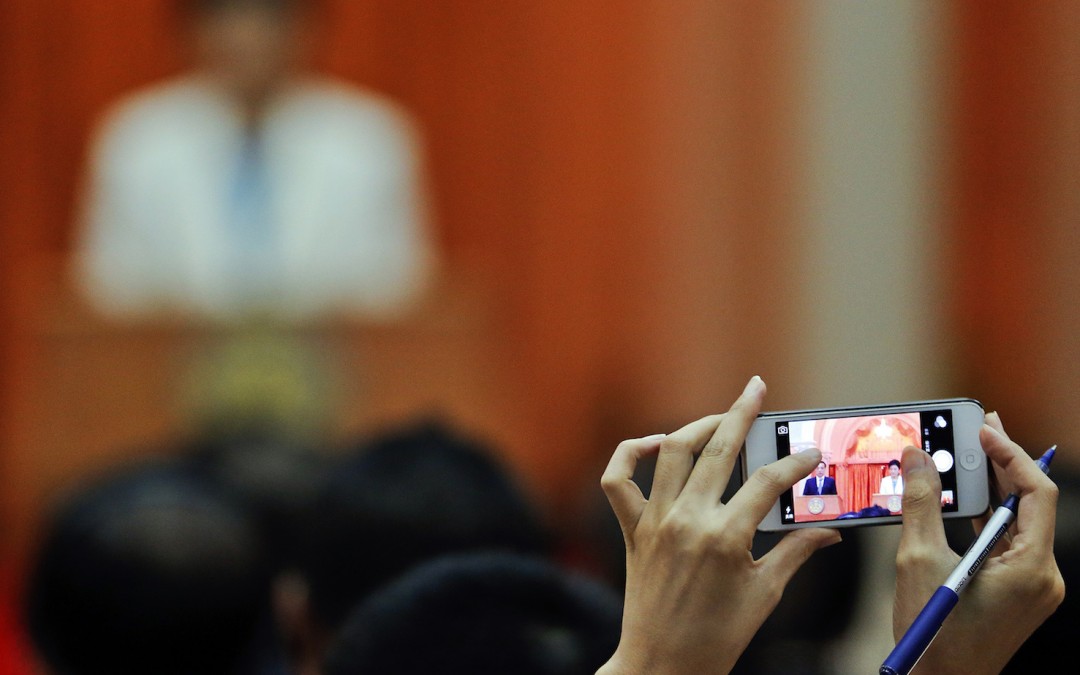 This essay appeared originally in April in Quartz and is by Anya Schiffrin.

“The US Ambassador no longer knows who to call,” often says Alec Ross, Hillary Clinton’s former advisor for technology. Certainly, conventional wisdom—cemented by the Arab Spring revolutions—holds that the Internet has dispersed the power of international organizations and governments, making crowd-sourced digital technology the new force for political change.

Yet domestic policy battles and geopolitics haven’t changed, making it hard to believe that digital technology has really transformed the entrenched power structures of the world. Economic inequality is worsethan it has been in decades. The Dodd-Frank Bill that might have reigned in banks’ and hedge funds’ worst excesses is being rolled back before it was even implemented. The far right is on the rise in Europe, and the entrenched old guard is again running the show in Egypt.

In many ways, it’s even worse than before. The Baathists of Saddam’s military dictatorship have regrouped and—with the help of young fanatics from around the world—have come roaring back to murder all manner of people in cold blood and then brag about it on Twitter and Youtube. Sophisticated authoritarian regimes can use the web not just for propaganda purposes but to track their opposition. As Evgeny Morozov argues in The Net Delusion (2011): “A dictator who answers his cell phone is still a dictator.”

Is the collective intelligence harnessed online really disrupting traditional institutions of power in the real world? Or is the power of the media, finance, government and military simply being reinforced in new and terrible ways? For a conversation about power and what comes next in a tech-driven world, I’ve turned to two new books: Joel Simon’sThe New Censorship, and Philip Howard’s Pax Technica.

Simon, executive director of the Committee to Protect Journalists, argues that the world has become far more dangerous for journalists. Digital technology is partly to blame, he writes in The New Censorship: Internet and the Digital Age (Columbia University Press, 2014), especially when it helps democratically-elected but authoritarian leaders (“democrators”) to stifle dissent.

Is the power of the media, finance, government and military simply being reinforced in new and terrible ways? Simon writes in detail about attempts to control the Internet and the dangers of surveillance, and is particularly critical of China and its role in international organizations where it is pushing controls on the internet. (In a recent cover story forColumbia Journalism Review, former Venezuelan trade minister Moisés Naím came down on the same side, with the view that digital technology makes things worse for the media by helping governments track and punish journalists.)

The decline of advertising revenue and paid subscribers for traditional media outlets—also tied to the rise of the web—has had made being a journalist more dangerous, says Simon. Local freelancers and bloggers upon whom the media increasingly rely are far more vulnerable than big name correspondents protected by the likes of The New York Times. And it’s not just that lesser-known reporters get kidnapped, tortured and killed in war zones like Iraq and Syria. In countries where there is a culture of impunity, like Mexico, these brave men and women without international reputations are more likely to be pressured or killed by the local gangsters or governments.

Yes, the power of the press has been reduced due to economic stress on the media, says Philip Howard, University of Washington professor and author of Pax Technica: How the Internet of Things May Set Us Free or Lock Us Up (Yale University Press, 2015). But, he argues, new power has been given to citizens, who can now use social media to expose wrongdoing, embarrass government officials and ask for change. “Every government in the world has faced some kind of damaging scandal or been brought to heel by citizens who used their mobile phones to document the illegal or embarrassing acts of political leaders,” writes Howard.

In India, the website Ipaidabribe.com lets citizens report on officials who have asked for bribes. Vietnamese bloggers were instrumental in forcing the government to change its plans for an environmentally damaging bauxite mine in 2007.  Nigerian website Sahara Reporters, operated from New York by founder Omoyele Sowore and funded by Omidyar Network, publishes documents leaked by whistleblowers about corruption in Nigeria. In 2013, they exposed Nigerian minister Stella Oduah, who used government funds to purchase two overpriced BMW 760 Li HSS cars, eventually forcing him to resign. Last year, Sowore told me that other local politicians subsequently cancelled their own orders for luxury cars.

According to Howard, a networked world of objects and people will usher in a new era of political stability. Corruption, government misbehavior, crime, police and military brutality will all be exposed by citizens. Stability will come too from cooperation between governments and corporations in the areas of “mutual defense pacts, design collaborations, standards setting and data mining,” says Howard, for whom control of technology is essential to political power. “Technological control and information access have consistently become the key factors explaining political outcomes and no country seems to have the upper hand.”

Yet, given the state of the world today, Howard’s vision of a “pax technica” feels like wishful thinking.

The recent hacking of Sony’s email, the use of Twitter and social media by ISIS and other extremists, and the unrelenting and ever-expanding surveillance of citizens everywhere suggest that in many ways the widespread use of digital technology means more harm, not less. At the same time, evangelizing the shared economy, Silicon Valley libertarians avoid taxes and government regulation, speaking a language of collective empowerment that is belied by their pursuit of monopoly and profit.

There is a difference between power and power structures. Online outrage and citizen journalism is good at pointing out egregious excess on a case-by-case basis and bringing down officials who behave badly or whose corruption can be documented. But it often doesn’t really weaken power structures or entrenched interests.

The language of collective empowerment is belied by their pursuit of monopoly and profit. The world is littered with examples of terrible problems that will not be fixed exposure on social media. To take one example close to home: we know that hedge funds and banks created the 2008 US financial crisis. The misdoings of the finance sector have been amply documented. But financial interests in this country are so powerful that they were able to weaken the Dodd-Frank law that was supposed to regulate finance to prevent a recurrence of those problems, and they are fighting hard to make sure that even this weakened law is not implemented. The collective outrage expressed on social media hasn’t been able to fix this problem, nor is it likely to do so in the future.

It’s clear too that when it comes to digital technology, fuzzy thinking abounds. If Uber and Airbnb create jobs at the cost of old businesses like taxis and hotels, then they aren’t really creating more wealth. They are simply transferring it from one sector to another. And if the new forms of mobile money like M-pesa charge their users exorbitant fees to transfer small amounts of money then they aren’t necessarily empowering their users; they are just overcharging them the way a bank would have.

How excited should we be about the prospects for the future? We should continue to be wary of unbridled optimism. We should be skeptical of anyone making overly ambitious claims. Given how easy mass surveillance has become and how different it is from the more targeted censorship and lack of privacy in the past, we need to be very worried even as we embrace the convenience of online shopping and the friendliness of Facebook.

But we shouldn’t lose hope, either – the democratic engagement made possible by almost frictionless tools is pregnant with promise.

The vigils that so recently filled the streets of Paris and elsewhere after the Charlie Hebdo killings seem normal, yet it’s hard to imagine them occurring so swiftly without cell phones to coordinate logistics. New digital technologies have provided tools that not only are part of a system of checks against government abuses, but can also strengthen the functioning of democracy. Some 20,000 people –including members of Spain’s leading political party Podemos – are now using Loomio, an online platform for deliberation and decision making. The difficulty facing us all is how to make use of the best that new technology has to offer, while still remembering that digital liberties are civil liberties and that privacy is something we must continue to fight for.